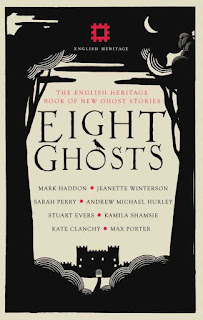 English Heritage is a registered charity that cares for over 400 historic monuments, buildings and places in England. The idea behind this book was to invite eight writers to be allowed after hours access at their chosen English Heritage site, in order to write a ghost story about that site.  Proceeds from the book will go so support conservation of English Heritage sites. So far, so good.

In practice the resulting stories are of mixed quality. "The Bunker" by Mark Haddon seems more like the set-up for a time-slip novel. It grabs your interest, but simply ends too soon. "As Strong as Death" by Jeanette Winterson bring a modern style to a ghost story at a same-sex wedding.  The opening story, "They Flee from Me That Sometime Did Me See"by Sarah Perry, is about a haunting attached to an intricately carved wooden screen in a large hall. "Mr. Lanyard's Last Case" by Andrew Michael Hurley is the story of a mid-eighteenth century prosecutor's last case. Stuart Evers's "Never Departed More" is a diffuse tale of an actress scouting out the locale of planned film; she becomes too involved with the ghosts. Kate Clanchy's "The Wall" tries some structural trickery which makes her story less satisfying, while Kamila Shamsie's "Foreboding" is groanworthy as it has a Middle-eastern or East Asian man in England experiencing a bad pun telepathically via his sister as she dies thousands of miles away. Max Porter's "Mrs. Charbury at Eltham" is the best story in the book, skillfully juxtaposing two parallel narratives, one from the 1930s and the other from modern times, into one connected haunting.  Andrew Martin adds an afterword, "Within These Walls," a rumination on the development of the ghost story, and there is an anonymous 39-page closing essay,  "A Gazetteer of English Heritage Hauntings," presumably by Rowan Routh, who is credited with editing this volume.
Posted by Bibliopolitan at 2:00 AM