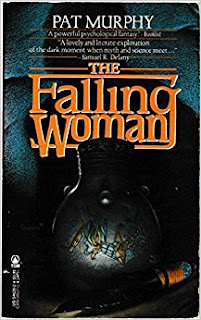 The Falling Woman (1986) by Pat Murphy is another one of the Nebula Award winners that I didn't read when it first came out.  It's an odd choice for a supposed "best science fiction" novel, for it is basically a mystical fantasy. (And later editions of the book add a subtitle that wasn't there initially, "A Fantasy.") But leaving all that aside, the book is basically the story of two women, Elizabeth Butler, an archeologist at a site in the Yucatan, and her estranged daughter Diane who seeks out her mother after a fifteen year absence following some upheavals in her own life, including the death of the father who raised her.  Elizabeth, who has a history of mental issues, sees ghosts from the past, and in the field of archeology, this appears as a bonus for her understanding of her work.  Diane decides to stay with the dig, and she too experiences these ghosts, including the ghost of a survivor of human sacrifice, the only survivor of the live offerings cast into a deep pool.  The characters are finely drawn, and their interplay passes for plot in most of the book. It is well-done, and engaging in a relative way, but I remain surprised that this novel is the winner of a major award.