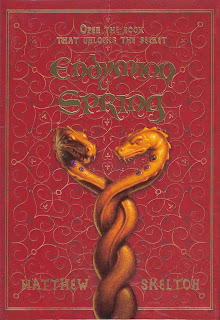 Endymion Spring (2006) is a curious first novel by Matthew Skelton. It operates on two related time-lines, one of a young boy Endymion Spring who is apprenticed to Johann Gutenberg in Mainz in the fifteenth century, as Gutenberg was developing moveable type. The other follows a young modern American boy Blake Winters, who is at Oxford with his younger sister and mother, who is a scholar studying at the Bodleian and other libraries. What connects the stories is a old book, blank to everyone but Blake, who sees various riddles and statements on its pages. What sounds like a promising start of an oddball biblio-mystery gets lost in its own development. This old book is evidently both powerful and magical, and it is purported to be able to lead its bearer to a Last Book, which contains all the wisdom of the world. Of course the various Oxford bibliophiles and scholars Blake encounters all know of this, and want the book for their own purposes. But this set-up is unconvincing and contrived, for the book itself is aware enough to guide Blake, and its pages conveniently glow with light when the plot needs it to. And this contrived nature makes the book much less interesting than it might have been. Still, it is readable, if not particularly well-written, and it is different enough from the popular  run-of-the-mill fantasies that it keeps one's interest. Overall, though, one can't help thinking that it should have been better.

Posted by Bibliopolitan at 12:02 AM