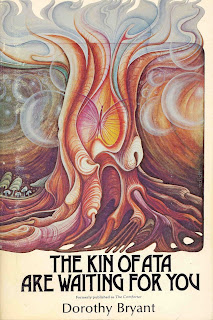 In 1971, The Comforter: A Mystical Tale was published by its author, D.M. Bryant. It tells the story of an arrogant and  unlikeable man who chokes his girlfriend to death and flees in a car, afterwards having a serious automobile accident.  The man wakes up in an island world rather like an idyllic California commune, with a self-sufficient but small batch of dreamers who seem to do almost nothing, which of course irritates the man.  So when wanting sex, he rapes one woman who had befriended him, and over the course of the rest of the book he learns their language and their ways, spending decades with this kin of Ata. The woman he raped becomes his lover and comforter, until she leaves (by metaphysical recourse) to come to this world to help make it better.  This desertion crushes the man, and eventually he decides to follow her back to this world, and he returns to find himself in a hospital, shortly after his automobile accident, and he is soon charged with the murder of his girlfriend. Thus the decades with the Ata were a dream vision. Or perhaps not.  The man realizes that he must plead guilty to the murder, because it is the right thing to do.  He writes the book The Comforter in order to explain himself, before he is executed and thereby can return to Ata.

This book is far better-known under the later title The Kin of Ata Are Waiting for You, which was used when it was first reprinted in 1976. The author was then signed "Dorothy Bryant."  One wonders whether the gender neutral initials it was first published under were to  mask the author as a female.  Yet the book itself is decidedly feminine in approach and attitudes, if once considers it a product of its era, that being California in the late 1960s.  As a novel it is mildly interesting, but nothing more. I don't understand why is has earned the status of cult classic.
Posted by Bibliopolitan at 3:00 AM

Email ThisBlogThis!Share to TwitterShare to FacebookShare to Pinterest
Labels: Dorothy Bryant, The Kin of Ata Are Waiting for You