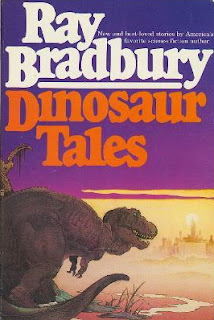 Dinosaur Tales (1983) by Ray Bradbury is a slim collection of four short stories, and two poems, overly illustrated by various talented artists with the shackles of black-and-white-only put upon their imaginations. There is a short foreword by Ray Harryhausen, and gung-ho introduction by Bradbury himself, but the end-result is really a fourth-rate product.  Only one of the stories is really good (the class "A Sound of Thunder" from 1951, which has been filmed a couple of times), the rest of the book is the kind of stuff one expects from a book packager who thinks:  "Ray Bradbury wrote a great dinosaur tale and a few other crappy ones, and one that isn't really a dinosaur tale but we can call it one. Let's bring them together with some black-and-white illustrations, and a color cover, that we can get for cheap and make a book of it."  And that's exactly what Byron Preiss Visual Publications Inc. did. The end-result only diminishes the reputations of everyone involved.