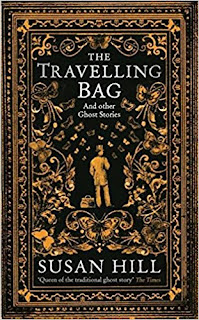 The Travelling Bag and Other Ghostly Stories (2016) is the latest collection of ghost stories by Susan Hill, known for her novella The Woman in Black (1983) which has been filmed twice. The new volumes contains only four stories, all of them silly in some way.  In the title story, the prank of filling a travelling bag with moths ends up with a man dead. In "Alice Baker" an office worker always has bad smells around her and she doesn't make friends with her co-workers.  Eventually, the narrator figures out she was a ghost. In "The Front Room" a Christian family, feeling charitable, move the husband's unpleasant elderly step-mother into their front room, with predictable awfulness.  "Boy Number 21" concerns a very lonely schoolboy whose one friend goes missing, yet apparently he reappears from time to time. All four stories feel unpolished--with incongruous ideas tossed off to keep the plot moving without regard to the story structure itself. A sad, disappointing little volume.

Posted by Bibliopolitan at 2:30 AM

Email ThisBlogThis!Share to TwitterShare to FacebookShare to Pinterest
Labels: Susan Hill, The Travelling Bag and Other Ghostly Stories