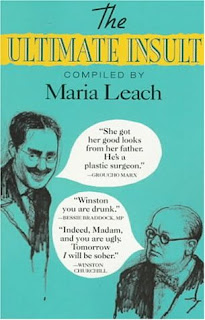 When feeling down, or braindead, from illness or any other cause, and I just don't feel up to reading real books, I turn to more eclectic fare like quote books, or commonplace books, or collections of graveyard epitaphs.  This time I tackled a collection of insults, The Ultimate Insult (1996), compiled by Maria Leach. Typically, the best quotes were on the topics of politics and religion.  I'll copy some of the best below.


“Politics is the art of looking for trouble, finding it everywhere, diagnosing it wrongly, and applying unsuitable remedies.”   Ernest Benn

“My deepest feeling about politicians is that they are dangerous lunatics to be avoided when possible and carefully humoured; people, above all, to whom one must never tell the truth.”   W.H. Auden

“Conservatives are not necessarily stupid, but most stupid people are Conservatives.”  John Stuart Mill

“Politics is the diversion of trivial men who, when they succeed at it, become important in the eyes of more trivial men.”  George Jean Nathan

“All politics are based on the indifference of the majority.” James Reston

“Being in politics is like being a football coach; you have to be smart enough to understand the game, and dumb enough to think it’s important.”  Eugene McCarthy


“Religion is the venereal disease of mankind.” Henri de Montherlant

“Religion is a monumental chapter in the history of human egotism.” William James

“The cosmos is a gigantic flywheel, making 10,000 revolutions a minute. Man is a sick fly taking a dizzy ride on it. Religion is the theory that the wheel was designed and set spinning to give him the ride.”  H.L. Mencken

“The impotence of God is infinite.” Anatole France

“Heaven, as conventionally conceived, is a place of so inane, so dull, so useless, so miserable, that nobody has ever ventured to describe a whole day in heaven, though plenty of people have described a day at the seaside.”  George Bernard Shaw

“In heaven all the interesting people are missing.” Friedrich W. Nietzsche

“Perhaps the most revolting character that the United States ever produced was the Christian businessman.”   H.L. Mencken

“You never see animals going through the absurd and often horrible fooleries of magic and religion. Only man behaves with such gratuitous folly. It is the price he has to pay for being intelligent but not, as yet, quite intelligent enough.”  Aldous Huxley


“Organized Christianity has probably done more to retard the ideals that were its founder’s than any other agency in the world.”  Richard Le Gallienne


“Truth, in matters of religion, is simply the opinion that has survived.”  Oscar Wilde

“A casual stroll through the lunatic asylums shows that faith does not prove anything.” Friedrich W. Nietzsche


“If you talk to God, you are praying; if God talks to you, you have schizophrenia.” Thomas Szasz

“Which is it: is man one of God’s blunders, or is God one of man’s blunders?”  Friedrich W. Nietzsche

“The chief contribution of Protestantism to human thought is its massive proof that God is a bore.”  H.L. Mencken


“If God created us in his own image, we have more than reciprocated.”  Voltaire

Most of these comments don't really fit the bill--per the book's title--as insults. They are just truisms.

Posted by Bibliopolitan at 1:45 PM