Reality Out of Joint 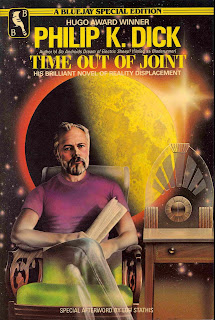 This time I grabbed Time Out of Joint (1959), the story of Ragle Gumm dismantling his 1950s world to realize that his reality was only a construct to shield himself from his harrowing situation in the mid-1990s.  This novel was Dick’s first hardcover book, and it mixes (not quite successfully) his attempts at writing mainstream novels with the inventive outlandishness that makes his science fiction novels so interesting.

But I wonder: has the modern world come too closely to resemble Philip Dick’s mindscape, that the impact of his novels is lessened?  Admittedly, Time Out of Joint is not top-tier Philip K. Dick, but the way that Hollywood films and television series have (again, with varying degrees of success) promulgated a Dickian worldview into the mainstream makes me wonder.  Time Out of Joint didn’t fulfill my need for reality-crushing paranoia this time.  Perhaps it’s time for a first-tier Dick novel that I haven’t yet read (Martian Time-Slip?), or a re-read of Ubik….

Posted by Bibliopolitan at 10:02 PM

Email ThisBlogThis!Share to TwitterShare to FacebookShare to Pinterest
Labels: Philip K. Dick, Time Out of Joint