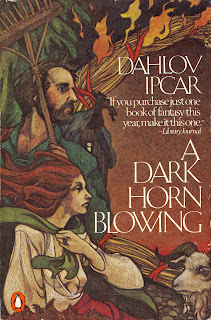 Dahlov Ipcar (b. 1917) is perhaps best-known as an artist, and secondarily as a writer and illustrator of children's books.  A fine retrospective is The Art of Dahlov Ipcar (2010) by Carl Little. Though she published some thirty books for children, and three young adult novels, she wrote only two books for adults, the novel A Dark Horn Blowing (1978) and a collection The Nightmare and Her Foal and Other Stories (1990), the latter including sixteen stories dating from 1958 through 1988.

A Dark Horn Blowing is a short novel written in four voices. The first voice is that of Nora, the mother who is magically taken away from her husband and newborn son to Erland to care for the newborn prince of the dying Queen of Erland. The other voices are that of Nora's husband, Eben, who is turned into a goat by the scheming witch Bab Magga; Nora and Eben's son Owen; and the Erland baby prince Elver who Nora calls Eelie. What Ipcar has skilfully done is to take various storylines from folk ballads and weave them together into a setting based upon a mix of English and Scottish folklore and Norse mythology. The result is a fine novel of the interaction between mortals and the fairy world.
Posted by Bibliopolitan at 9:05 PM