When I learned that the SyFy Channel would be showing in December 2015 a six hour mini-series of Arthur C. Clarke’s classic science fiction novel, Childhood’s End (1953), I decided I would read the book before I watched the adaptation.  I’m glad I did.  If I’d seen the mini-series first, I would have been far less likely to read the book, and that would be a shame. 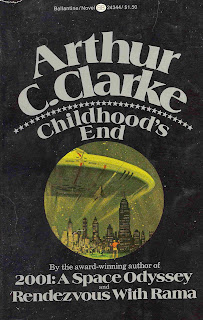 Clarke’s novel may have its faults, but the mini-series makes a travesty of the novel. Part of the appeal of the novel is its scope, and the fact that it presents characters in their appropriate storylines and then leaves them. The mini-series shortens the timeframe of the novel, and gives the characters a youthful long-life, so that it can attempt to build human moments into the narrative.  It doesn’t work—everything seems contrived . . . as in a screenplay. In an attempt to make the story more personally relevant, SyFy has emptied the heart of the story.  Characters are altered into cliches, and milked for situational suspense, without significant context or explanation.  Elements that are barely hinted in Clarke’s novel are expanded to annoying vacuity, like the person of faith who can only see the Overlords as demonic. One character even says “no one should have to apologize for their faith.” This is the screenwriters projecting themselves into the story.  This is not Arthur C. Clarke.

Read the book, by all means.  It’s an interesting take by a person of science into thoughts about the future and destiny of mankind.  But avoid the mini-series. It is a manipulative, soulless, simple-minded, train-wreck sequence of special effects, designed to distract the brain from thinking about the very issues is superficially presents.

Posted by Bibliopolitan at 11:53 PM