A Visit to Narnia


I read two or three of the seven Narnia books when I was a young teenager.  I didn’t think much of them, but over the years I have occasionally felt that I was doing a disservice by not reading them all. So . . .  I took a vacation in Narnia, and at last have read all seven books.  I hope never to visit Narnia again. 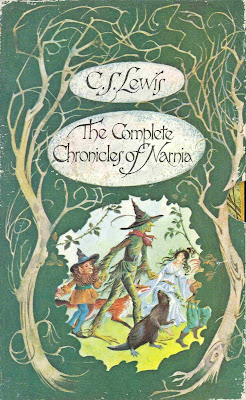 I read the seven in the order of publication, not the stupid chronological order that the publisher has imposed upon them since the 1990s, which places the usual sixth volume, The Magician’s Nephew, as the first, thereby giving explanations for later plot developments before they could mean anything to the reader.

The main problem with the Narnia books is that they are filled with annoying children and various dated stereotypes.  These include gender roles as well as racial stereotypes, like the Arab-based Calormenes (who use scimitars, and Lewis tells us, “smell of garlic and onions” as if that’s a bad thing).  Modern education is mocked in The Silver Chair (Experiment House is, horror of horrors, co-educational, and Bibles are not encouraged there, as if it is a bad thing to discourage religious superstition). “Advanced” people are sarcastically called vegetarians, non-smokers, and teetotalers (what’s wrong with any of those qualities?). Most of these problems are expressed subtly, but Lewis bangs you over the head with Aslan, his Christ-figure who, shucks, does good things for only his friends who believe in him, but lets all those who don’t know his selfish “wisdom” fend for themselves; they receive deserved punishments.  Lucy is the dimmest of all the children in the series, as she is frequently mooning and yawping about Aslan. Susan, on the other hand, is probably the most sensible character to have visited Narnia, for she is no longer welcome there after she has discovered lipstick (i.e., sex appeal, and presumably sex).  Is this the kind of nonsense that “grown-ups” think children should read?  I don’t.  But C.S. Lewis does occasionally wander off track from his main proselytizing role, such as with the frequent kisses that young King Tirion bestows on his male unicorn named Jewel.  Does this reference homosexuality or bestiality, or both?  Alas, even such a reading does little to make Narnia palatable. Pauline Baynes's delightful illustrations, however, do raise interest in the series, but they are like the sugar coating on a poison pill, designed to get a someone to swallow something otherwise very unpleasant.
Posted by Bibliopolitan at 2:00 AM

Email ThisBlogThis!Share to TwitterShare to FacebookShare to Pinterest
Labels: C.S. Lewis, The Chronicles of Narnia