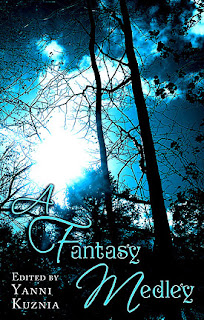 A Fantasy Medley (2009), edited by Yanni Kuznia, is another of the short anthologies published by Subterranean Press that serve as good introductions to writers of the fantastic. This book contains stories by four authors, all women, and nothing (not even an introduction) by the editor.  Kelley Armstrong’s “Zen and the Art of Vampirism” is an urban fantasy of Toronto’s supernatural creatures and of the attempt by two newcomer vampires to take over the city from the current nonviolent vampire.  The style is plain and modern; the story unexceptional but decent.  Kate Elliott’s “Riding the Shore of the River of Death” is a more ambitious tale of a young woman trying to accomplish the rites of passage into manhood, and thus avoid accepting the traditional role of women in her clan.  Though interesting, it is less successful, perhaps because it is set in a world Elliott has explored more fully in her “Crown of Stars” series. C.E. Murphy’s “From Russia with Love” is a surreal and not especially involving reworking of some of the Russian folklore about the Baba Yaga.  The gem of this small book is the final tale, Robin Hobb’s “Words like Coins,” in which two women, living during a severe drought, come to work with the pecksies (not quite the usual pixies of folklore) in order to survive. Pecksies, who have their own rules and loyalties, can be bound to humans by words, and the precision of the expression of these words can cause unexpected problems. 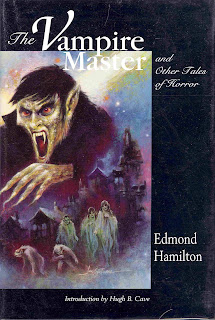 The Vampire Master and Other Tales of Horror (2000) by Edmond Hamilton, collects stray tales by Hamilton, who was one of the stalwart contributors to Weird Tales magazine in the late 1920s through the 1940s. Of the nine stories collected here, four of these—including the title novella—come from Weird Tales, where they appeared under the pseudonym, Hugh Davidson.  “The Vampire Master” and “The House of the Evil Eye” are cases of Doctor John Dale, a physician who specializes in evil, and his assistant Harley Owen. Dale is pretty incompetent as a fighter against evil, especially in the title story. Despite Dale’s precautions that are supposed to keep people alive, the victims keep accumulating. And his solution to rid the world of the vampire menace, by making bullets with a cross on the front point, is just silly.  Of the other tales, one from Strange Tales  called “Dead Legs” is laughably bad—an invalid criminal takes the legs of an enemy and has them transplanted on himself, with the end result that his new legs try to betray him.  Four other tales come from Thrilling Mystery, an even lower brow pulp with even stupider stories.  H.P. Lovecraft and his circle of friends from Weird Tales considered Edmond Hamilton a real hack.  Now I know why.

Posted by Bibliopolitan at 11:53 PM