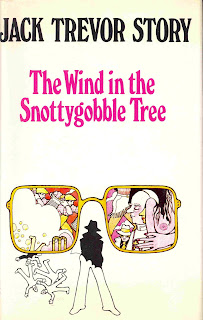 The Wind in the Snottygobble Tree (1971) by Jack Trevor Story is a bizarre book.  Travel agent Harry Marchmont amuses himself by pretending to be a spy.  Or is he pretending? He’s certainly taken for one by the various parties chasing him and trying to kill him.  Somehow he becomes involved with a plot to replace the Pope with a fake Pope, only in the end to learn that the current Pope is already a fake, who is glad to be replaced and thus retire.  Meanwhile Marchmont exercises his libido in a manner which reads like a parody of James Bond as written by Edward Whittemore.  Typographically this is also an odd production—the font in this edition (published by Allison & Busby) is not right-margin justified, and in the second half of the book, there are a number of sentences or paragraphs which for no apparent reason have words sprinkled with dashes:  e.g., “Ir-ma al-so lik-ed the i-dea of the pun-ish-ment and es-pec-ially the thought of this new young he-ro ad-min-ist-er-ing it” (p. 104).  This is unnecessarily distracting, in a book already strange enough to range along the limits of boredom. The novel was serialized in four parts in New Worlds, from November 1969 through February 1970.

The Colour Out of Darkness (2006) by John Pelan is a riff on Lovecraft, part of a series of novellas published by Cemetery Dance (this is number 17, but what the other titles might be I cannot say—there are no mentions of any of them in this book).  Basically, this is a tale of the resurgence of the Old Ones among modern Seattle’s disaffected youth, with an extra helping of sexually graphic torture-porn prose. It’s better written than I expected, but it is structured awkwardly, and the plotting is predictable. As Lovecraftian fiction, it’s mediocre at best.

Posted by Bibliopolitan at 12:17 AM

Email ThisBlogThis!Share to TwitterShare to FacebookShare to Pinterest
Labels: Jack Trevor Story, John Pelan, The Colour Out of Darkness, The Wind in the Snottygobble Tree