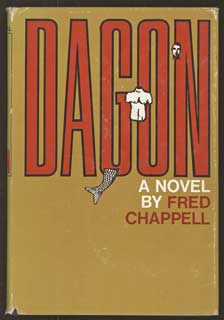 Dagon (1968) by Fred Chappell is a short novel, mixing elements of the southern gothic, with the mythos of H.P. Lovecraft. The Lovecraftian elements are minor, at least until the conclusion, and most of the novel moves at a slow pace with unlikable characters doing unspeakable things to each other. It starts out with the minister Peter Leland and his wife Sheila taking up the house and four hundred acres that Peter has inherited from his grandparents.  There he plans to work on his theological book on Dagon, a forgotten ancient pagan god who is mentioned in the Book of Samuel. Peter finds a bizarre family of squatters who have lived on the property for generations, and some strange torture implements in his attic that seems to relate to his father’s mysterious death decades ago. So far, so good, but the story abruptly shifts, as Peter brutally murders his wife, and takes up with the young girl of the family of squatters, who keeps him supplied with moonshine and uses him for occasional sex, eventually taking him and her other boyfriend on a road trip with a predictable result. Much of this novel feels like unnecessary padding, and it would probably have been more successful for this reader at a much shorter length.

The Craft of Writing (1979), by William Sloane, was put together five years after its author’s death by his widow. Though Sloane had published two science-fictiony horror novels, he was mostly known as a publisher, and he was one of the main people behind the annual Bread Loaf Writers’ Conference for a quarter of a century. This slim book collects materials from some of his Bread Loaf lectures as well as from his correspondence. It has some real wisdom in it, but it doesn’t really hang together as a book on the craft of writing. Here are a few kernels:  “Let the material dictate the form” (p. 20). “Art cannot be taught . . . What can be taught is technique, craft, method, understanding of the medium” (p. 27). “People are not the principal subject of fiction; they are its only subject” (p. 81). “I urge those of you who are writing fiction to shun the impulse that diminishes the tension inside you while you are writing. Don’t talk about your novel to other people” (pp. 106-7). The sections on “Scene” (Chapter 5) and on “The Nonfiction Writer” (chapter 8) are the least effective in the book.

Posted by Bibliopolitan at 10:32 AM