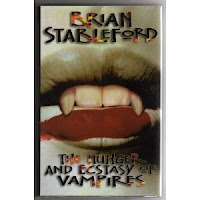 The Hunger and Ecstasy of Vampires (1996) by Brian Stableford is a strange work.  The title might make one expect a lurid modern vampire story, but that’s not what you get with this novel.  Instead you get characters (real people and imagined ones) meeting up in London in January 1895 to hear on Edward Copplestone relate his experiences of astral projection to the distant future while on some special drug. One of the listeners, Mr. Wells, is concerned with the similarities to a story he has written and published serially.  Oscar Wilde finds the whole story a glorious lie.  Other listeners and commentators include the scientist and spiritualist Sir William Crookes, president of the Society for Psychical Research, and a medical doctor and his detective friend who lives on Baker Street (Sherlock Holmes could not be named in a story in 1996 for copyright reasons). Copplestone’s narrative tells of the triumph of vampiric beings over normal men in the future.  It’s an interesting tale, but not what I was expecting.

Teaching the Dog to Read (2015) by Jonathan Carroll.  Have I just read too much Jonathan Carroll that the magic is gone? His recent novels have left me pretty cold, and for the first time ever I stopped reading his last one in the middle.  In his earlier books, there was a modulated relationship between realism and fantasy, and that worked out very well. His recent stories have tended to throw in too many elements of fantasy.  That doesn’t have to be a bad thing, but when the elements just don’t fit together it is.  In Teaching the Dog to Read, Tony Areal is divided into two Tonys, Tony Day and Tony Night, the latter of whom helps arrange the night-time dreams of Tony Day. They switch places, and one of the Tony’s falls in love, and collapses of a heart attack.  From there we meet  the previous incarnation of Tony, and then the first incarnation in the form of a caveman; and it all becomes too much.  Carroll’s shorter works are frequently problematic.  He definitely works better at novel length. If you’ve never read Carroll before, skip this novella and grab The Land of Laughs or Bones of the Moon.

Posted by Bibliopolitan at 1:57 AM

Email ThisBlogThis!Share to TwitterShare to FacebookShare to Pinterest
Labels: Brian Stableford, Jonathan Carroll, Teaching the Dog to Read, The Hunger and Ecstasy of Vampires