Some Art Books and Others 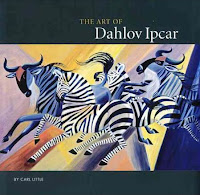 The Art of Dahlov Ipcar (2010) by Carl Little, celebrates the life and art of Dahlov Ipcar (born 1917), who settled in Maine in 1937 and who has lived and worked there ever since.  Ipcar is also known as a writer/illustrator of many children’s books, and as the author of a smaller number of adult novels, most notably the fantasy A Dark Horn Blowing (1978).  Her artwork as showcased in this book centers on animals, often in a kaleidoscopic presentation, with deep and rich colors. This is a fine retrospective.

Inner Visions: The Art of Ron Walotsky (2000) is a collection of the artwork by Ron Walotsky, covering about three decades worth of production. Much of Waltosky’s art was made for the covers of science fiction books, including iconic ones for books by Robert Silverberg, Piers Anthony, Roger Zelazny, and for The Magazine of Fantasy and Science Fiction.  Again, it makes for a very enjoyable retrospective.

Only Visiting this Planet: The Art of Danny Flynn (1994) is a third retrospective, this time by a British artist, most of whose art appeared on the British covers of books by writers such as Robert A. Heinlein, Brian Stableford, T.M. Wright, Octavia Butler, and George R.R. Martin.  Flynn’s work is less known in the , but it is distinctive and evocative, and it’s good to see a collection like this.

The Story of Doctor Dolittle (1920) was written and illustrated by Hugh Lofting, the first of some twelve books in the series. Doctor Dolittle is a great friend to animals, and he has learned their speech and filled his house with them. When word reaches him that the monkeys in are dying from an epidemic, Dolittle heads there with his animal friends, Jip the dog, Dab-Dab the duck, Gub-Gub the pig, and Too-Too the owl. The depiction of the Africans exhibits the racism of the time, and this led to the rewritten versions published, under the direction of Lofting’s son Christopher, beginning in 1988. The sensitive re-writing of objectionable passages doesn’t really diminish the qualities of the original.  But whether these qualities—such as the whimsical humor in both the words as well as the illustrations—are appealing is a valuation up to the reader. Though the Dolittle books are considered classics of children’s literature, their charms elude me. 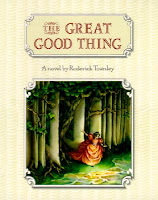 The Great Good Thing (2001) by Roderick Townley is a book about a children’s book, a kind of meta-story, and what happens to its characters when their story isn’t being read.  Princess Sylvie gets obsessed with her reader, and finds a way to leave her book, at first temporarily.  The real story is not so much that of Sylvie, but that of her reader, Claire, who has opened up the book after a long gap.  The book had belonged to Claire’s grandmother’s—she was the first reader—and offstage she is an old woman who dies, while the story outside the book continues as Claire ages.  This description makes the book sound better than it is—the juggling of the two settings, inside the book and outside of it—comes off rather clumsily, and the more important story—the one outside the book in underdeveloped in comparison with the story within the book. And the characters within the story book are also better developed. This diminishes the story’s power considerably. The Great Good Thing was followed by two sequels, Into the Labyrinth (2002) and The Constellation of Sylvie (2005).

The 10th Victim (1965) by Robert Sheckley is a short novel, the set-up for which is that, in the future, humankind’s natural aggression has been channeled into a Hunt, between two volunteers, who play the roles of either Hunter or Victim.  Anyone who volunteers to be part of a Hunt must do so for ten hunts (presuming they live that long), after which a Tens winner gets almost unlimited rewards. Here Caroline Meredith is working on her tenth legal kill. She goes to to find her victim, taking a film crew along to cover her momentous kill, planned to take place in the Coliseum. Things don’t work out exactly as planned. This novel began as a short story, titled “Seventh Victim,” published in the April 1953 issue of Galaxy.  In 1965, a European film (starring Marcello Mastroianni and Ursula Andress) was made as The 10th Victim, and at this time Sheckley expanded his story into a short novelization of the film.  It was reprinted in 1987 (in the edition I read), alongside the publication of a sequel, Victim Prime (1987) and in anticipation of a third volume, Hunter / Victim (1988). The short story is probably the best version, as the later novel feels padded and lacks focus. There is some satire in it, but not enough to be very interesting. And there is certainly not enough of interest in it to make me want to read the second and third books.

Posted by Bibliopolitan at 11:30 PM