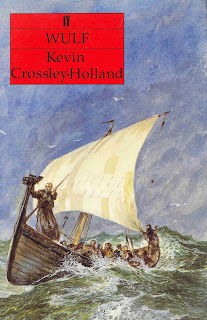 Wulf (1988), by Kevin Crossley-Holland, is a revised omnibus of three very short books comprising "The Sea Stranger" trilogy, The Sea Stranger (1973), The Fire-Brother (1975), and The Earth-Father (1976). It's set in seventh-century England, on the east coast of Essex. It follows a young boy named Wulf and his friendship with Cedd, a historical figure and Christian missionary who founded a monastery in Ythancestir (modern Bradwell-on-Sea) in the 650s and later became a bishop. The book is clearly intended for the young adult audience. I approached it expecting a coming of age tale, with (I hoped) some vivid historical detail, but what I found instead is basically a piece of Christian propaganda. The characters are simplified down to the willing and eager acolyte, and his kindly and knowledgeable master. Yawn. This kind of stuff was trite when it was first published forty-some years ago, and it hasn't gotten any more palatable with the passing decades.

Posted by Bibliopolitan at 11:03 AM