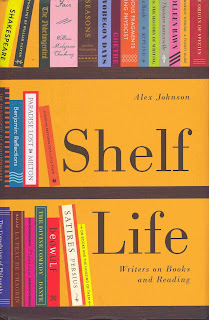 Shelf Life is a slim book collecting eleven essays, or extracts,  from writers discussing books and reading. The oldest is a piece by Francis Bacon from 1601, the most recent being one by Walter Benjamin from 1931.  Five are from the nineteenth century, while five (including the one by Benjamin) are from the early twentieth century.  Sadly, this gives a feeling of mustiness to the anthology, but there are some worthwhile observations here and there amidst the otherwise dated perspectives. Walter Benjamin opines that "writers are really people who write book not because they are poor, but because they are dissatisfied with the books which they could buy but do not like" (p. 17).  Theodore Roosevelt, perhaps the best-read of the presidents of the United States, writes with gusto in the best essay in this collection:


The equation of personal taste is as powerful in reading as in eating; and within certain broad limits the matter is merely one of individual preference, having nothing to do with the quality either of the book or of the reader's mind. I like apples, pears, oranges, pineapples, and peaches. I dislike bananas, alligator-pears, and prunes. The first fact is certainly not to my credit, although it is to my advantage; and the second at least does not show moral turpitude. (p. 54)

Other essayists include Charles Lamb, Arthur Schopenhauer, W.E. Gladstone and Rudyard Kipling. A moderately diverting selection.
Posted by Bibliopolitan at 3:12 AM