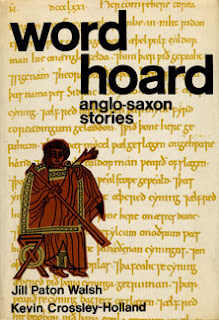 After my recent experience with Kevin Crossley-Holland's Wulf, I wondered whether I should bother with his collaboration, with Jill Paton Walsh, on Wordhoard: Anglo-Saxon Stories (1969), a slim book containing eight tales. I'd already bought the book, so I figured I'd read it anyway. I'm glad I did. The tales are gathered in pretty much historical order, chronologically, from early Anglo-Saxon times on to the final story set at the time of the Norman Conquest. What they do is to tell stories of various people, mostly ones unknown to history, and of the intersection of their lives with better known figures. The style of the telling varies. Some tales are more vibrant, others more introspective.  At first I wondered if the difference was related to which author wrote the tale, but after finding the key (on the table of contents, the authors initials are given after the page number, so one learns that Paton Walsh wrote four, and Crossley-Holland wrote four) the observed stylistic differences are not so easily accounted for. Crossley-Holland's tales usually have the more relevant historical association, as in "The Horseman," in which a deserter from the Battle of Maldon seeks assistance from the children of a  man who had left them and went on to be slaughtered, or in the final tale, "The Eye of the Hurricane," in which King Harold is dying on the battlefield in 1066 and recalls better moments in his life. Overall, it's a decent collection.

Posted by Bibliopolitan at 9:26 AM