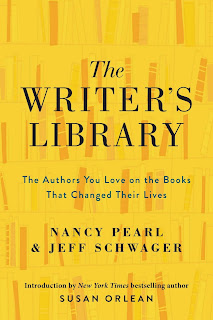 The subtitle of this book, "The Authors You Love on the Books That Changed Their Lives," promised something a bit different to me than what it actually delivered. I wanted something more in depth, but this book is a series of chatty interviews with twenty-two authors, about half of whom I was already familiar with. But the chattiness is only skin-deep, and  too often I felt the authors straining to include names of Writers with Whom They Are Friends, or Writers That Must Be Name-Dropped. Oddly, for a 350 page book about books, I was not once tempted to look-up an unfamiliar book mentioned by either the authors or their interviewers, nor did the authors unfamiliar to me entice me to seek their works. That is a feat, if one opposite than intended.

Posted by Bibliopolitan at 9:33 PM