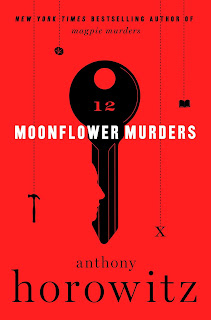 Anthony Horowitz does a rather daring feat in this whodunnit. The solution to an eight-year old murder is discovered by a young woman in the pages of a murder mystery, and she promptly disappears. The author of the mystery is dead, so the book's editor is called upon by the nervous parents to solve the disappearance of their daughter. The daring feat is that in the middle of this whodunnit, Horowitz actually prints in toto the mystery book. Sadly, though, the mystery is rather dull in comparison to the page-turning frame novel. And while the whole is clever, and engaging, the prose is basically that of a fleshed out screenplay. Not surprising, then, is the fact that the author is a television screenwriter, as well as writer of the best-selling Alex Rider stories for young adults (which have also been filmed). Moonflower Mysteries clocks in at over 580 pages, and while I enjoyed it, I think I would have gotten as much pleasure out of it in the form of a two-hour movie. At least the time spent with it would have been shorter.

Posted by Bibliopolitan at 11:00 PM