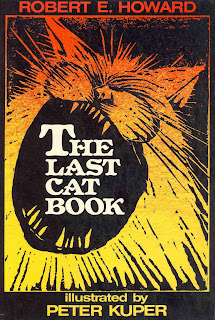 This is a rather different offering from Robert E. Howard, known for his Conan stories. It is a brief essay on cats from the early 1930s originally titled "The Beast from the Abyss." Here it is amplified with over fifty linoleum prints by Peter Kuper. It's a delightful match of text with illustrator.  The text gives many keen observations of the feline nature:

His manner is at once arrogant and debased.

He arches his back and rubs himself against humanity's leg, dirging a doleful plea, while his eyes glare threats and his claws slide convulsively in and out of their padded sheaths.

And the illustrations follow through wonderfully. I reread this with pleasure every decade or so since it came out in 1984.

Posted by Bibliopolitan at 10:30 AM