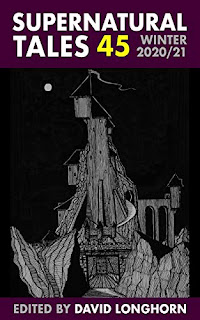 Supernatural Tales, issue no. 45, is kind of like a small anthology, edited by David Longhorn. It contains eight stories, none especially long, with a broad range of topics that do fit under the title's rubric.  Most are well-written, but a few of them are oddly structured and less satisfying than they might have been. Mark Valentine's story "And Maybe the Parakeet Was Correct" is arguably the best story in the issue, but it meanders around various locales of European football before it finally jells into something intriguing near its end. Iain Rowan's "The Wildness" is a story of a woman's dissolution via her own "wildness," but it seemed a bit too short. William Curnow's "The Roundabout" is not the best written tale, but the most interesting story-wise, about how a man processes his grief over his wife's death via terrifying visions on a roundabout. In "Stricken," by Carrie Vaccaro Nelkin, a woman with a feverish illness has to face monsters, while in "The Terminal Testimony of David Balfour," Malcolm Laughton gives a tale of enacted revenge.  Rosalie Parker's "The Decision" concerns a woman wavering over whether to keep her inherited childhood home (and her boyfriend) or leaving it (and him) to go to London.  As she decides, she is haunted by the sound of laughter that no one else hears. Charles Wilkinson's "The Harmony of the Stares" concerns a musicians attempt to reproduce a version of the sounds of starlings in a "murmuration," though this cloaks some murkier happenings too. The only dissatisfying story (for me) was Tim Foley's "The Ghost of Niles Canyon," which is a nested double-vanishing hitchhiker-tale whose ending was telegraphed far in advance.  A worthy and enjoyable issue overall.  Order via Lulu,  or see more details via the blog.

Posted by Bibliopolitan at 9:29 PM