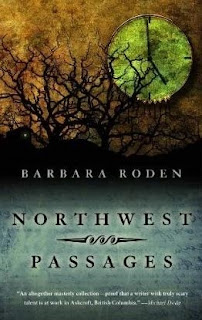 Northwest Passages (2009) by Barbara Roden contains some very enthusiastic blurbs from the likes of Peter Straub ("Barbara Roden has placed herself among the ranks of the most telling, most effective, most readable living writers of the strange and fantastic tale") and others.  I know to take such blurbs with the proverbial grain of salt, yet I couldn't help but expect something more than the mostly competent yet uninvolving tales that comprise this collection. Only in the title story does the plot and characters cohere into something more than the quotidian. A few of the other nine tales read almost like cribs from the diaries of polar explorers--interesting, but nothing special.  I wanted and expected to like this more than I did, but sadly found a number of the stories a slog to get through.

Posted by Bibliopolitan at 4:00 AM