A Search for the King 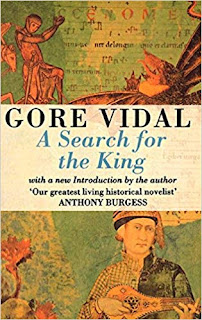 Gore Vidal is perhaps best remembered as an American public intellectual with a pungent wit. Of his writings, his essays are especially noteworthy, and many of his historical novels were  popular bestsellers. A Search for the King, published early in his career, is not a typical Vidal novel in a number of ways. Foremost because it mixes elements of fantasy into the story.  Basically, the novel is set in the late twelfth-century and follows Blondel, a faithful troubadour of King Richard the Lion-Heart. Early on, Richard is taken prisoner on his way home from the Crusades, and the novel tells of Blondel's adventures in central Europe while searching for him. These adventures include a fight with a dragon, meetings with werewolves and a vampire, but none of these fantastical encounters are entirely traditional according to legend.  The dragon does not breath fire, the werewolves act as bandits (as their king admits, "instead of eating human flesh we live on gold taken from human visitors"), the giant grew up in a monastery until his obtained his Growth, which the monks regarded as the work of the devil so they cast him out. The vampire is a practical female Countess, who feeds on her subjects but is careful not to kill any of them. And even a unicorn makes an appearance, but not to a young virginal girl but to a young boy on the verge of manhood whom Blondel had befriended.  A Search for the King is a slow-moving, meandering book, and not among Vidal's best, but I enjoyed it.

Posted by Bibliopolitan at 10:12 AM

Email ThisBlogThis!Share to TwitterShare to FacebookShare to Pinterest
Labels: A Search for the King, Gore Vidal