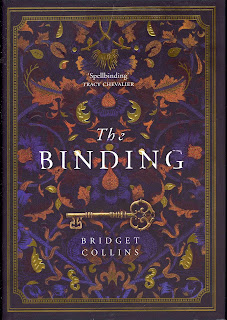 The Binding (2019) by Bridget Collins is marketed as her first book for adults, following seven novels for young adults.  But there is really nothing in this novel that marks it out as for adults per se. It is basically an elongated love story, though details of the love are at first hidden.  Young Emmett Farmer tells his own story after a mysterious illness. It turns out that he was taken to a witch-like Binder, whom he learns removes memories from willing subjects and writes them down in beautifully bound books.  After he recovers from his ailment, Emmett is taken by the Binder Seredith (of whom he has no memory) to be her apprentice, for in binding him she discovered that he had the powers of being a notable Binder himself. In the first of three parts of this book, Emmett tells his story up to when he learns that he had previously been bound, and by burning his book, the memories come back to him. The second part of the book is  also in Emmett's voice, telling of the memories that were taken away. It is not really giving much away to say that his love story concerns another young man, as this is foreshadowed from very early on. For the third and final part of the book, the narrative shifts to the point of view of Lucian, Emmett's lover, who has similarly had his memories of their relationship bound. The shift in narrative voice is not very successful, and the whole third section seems rushed and forced in the telling.  Thought inevitably the two young men end up together again at the end, the reactions of virtually every other character in the novel to the idea of a same sex couple is positively medieval.  Though the plot gives the tale some aspects of a page-turner, the construction and technique of the author are second rate at best.

Posted by Bibliopolitan at 2:00 PM

Email ThisBlogThis!Share to TwitterShare to FacebookShare to Pinterest
Labels: Bridget Collins, The Binding