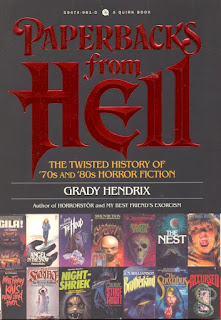 Paperbacks from Hell by Grady Hendrix chronicles those years, and is profusely illustrated with covers from the books published during that period.  Most of the cover art is decidedly cheesy, and Hendrix's text is often snarky, and one wishes he wrote more about the literary merit (or lack thereof) of more of these books, for among the cheesiest of covers there hides a number of worthy books that didn't deserve to be marketed the way they were.

But the comments and descriptions are still often helpful, especially when it spells out for me the quality and content of certain authors and books that, for whatever reason, I decided not to read in those years. Though tempted by some of the titles back then, in virtually every instance I find from Hendrix's comments that I'm better off not having read those books. This is a matter of interests and aesthetics, not of quality.  Occasionally Hendrix's commentary borders on too glib, but there is a lot to think about while reading this book, and I'm glad to have done so.

Posted by Bibliopolitan at 12:33 PM