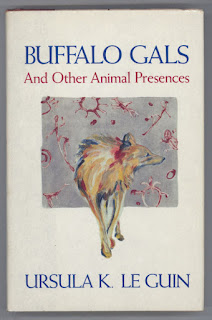 Buffalo Gals and Other Animal Presences (1987) is a mixed collection of stories and poems by Ursula K. Le Guin, including reprints together with one new story ("Buffalo Gals Won't You Come Out Tonight"). All concern some aspects, usually mythic, of animals  or other sentient presences, and their interaction with humanity.  In the new story, a young girl spends time with an older woman who is the trickster Coyote.  The best story in the book is science fiction, part of Le Guin's Hainish tales, "Vaster Than Empires and More Slow," from 1971.  Some stories read like writing-class exercises, like the extracts from the purported Journal of the Association of Therolinguistics, which includes a discussion of the poetry written by ants, and how to approach the sea-literature of the penguin. Another story, "May's Lion" tells the same story twice, from a realist perspective, and from a fabulist one. The volume as a whole is not Le Guin at her very best, but even middle-of-the-road Le Guin is rewarding and well worth reading.

Posted by Bibliopolitan at 1:00 AM