The Sins of Jack Saul 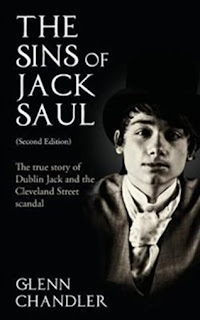 Jack Saul (1857-1904) was a male prostitute in Dublin and London. He was famously involved in the Cleveland Street Scandal of 1889, in which the involvement of highly-positioned society figures was covered-up during criminal prosecutions related to a London homosexual brothel located on Cleveland Street. Saul was also the central character and contributor to an infamous volume of pornography, The Sins of the Cities of the Plain (1881). The Sins of Jack Saul tells Jack's story, and provides a detailed look at the Dublin and London gay underworlds of the mid-Victorian era, based on archival documents. I could wish that the sources were better detailed, but the narrative itself is well-written and the subject covers in detail aspects of the Victorian underworld that are usually glanced over if discussed at all. I found the book fascinating. The copy I read of The Sins of Jack Saul is labelled the "Second Edition" and was published in 2016.  It doesn't say when the first edition appeared. (The cover photograph is not of Jack Saul—no photographs of him are known to exist).

Posted by Bibliopolitan at 11:17 PM

Email ThisBlogThis!Share to TwitterShare to FacebookShare to Pinterest
Labels: Glenn Chandler, The Sins of Jack Saul