The Other Side of Green Hills 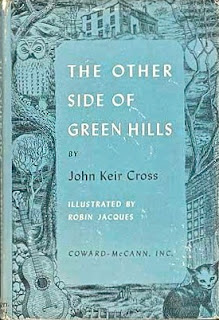 The Other Side of Green Hills (1947) is a children's book by John Keir Cross.  It concerned five children who are staying at a house called Green Hills in Berkshire over a Christmas holiday. They discover that there is another dimension, an Other Side, to the house where things are very different. On the Other Side they encounter a strange pair, an old man and a young girl, who are called the Owl and the Pussycat after the famous nonsense poem by Edward Lear. (The British edition of this book is titled The Owl and the Pussycat. The title was changed presumably because American children wouldn't understand the reference.)  Owl has the very annoying tendency to burst into song. Later in the book things take a darker turn, as the children find out that an evil sorcerer, who controls the creepy Moon Folk,  is seeking to open further pages of the Book of All Wisdom, by which he can rule the universe. The Owl and the Pussycat and the children must find a way to stop him.

This is an odd book, and the initial whimsicality doesn't mix well with the more serious later parts. Even the whole set-up doesn't seem very well thought-out, and the resultant story doesn't really engage the reader. And the illustrations by Robin Jacques are alternatively interesting or off-putting. The whole book is a misfire.
Posted by Bibliopolitan at 9:03 PM

Email ThisBlogThis!Share to TwitterShare to FacebookShare to Pinterest
Labels: John Keir Cross, The Other Side of Green Hills, The Owl and the Pussycat