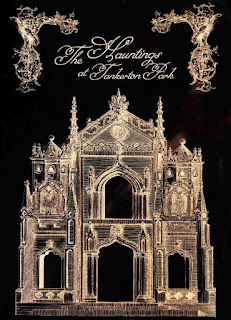 Reggie Oliver has published a number of remarkably good collections of weird short fiction since  2003, some volumes of which have his own illustrations. In 2016, he tried something in a new vein, an oversize heavily-illustrated tale in verse, The Hauntings at Tankerton Park.  It was first published in a hardcover limited edition at a high price, but it has now appeared in a paperback edition, also at a high price for what it is (around $45 for some 52 pages).

The story is basically about the Clark family who move into  Tankerton Park in early 1890, where they experience a sequence of hauntings in alphabetical order.  The first half of the book has one line of verse (with an illustrated letter), facing a full page illustration, done in considerable detail.  The the lines for the odd and even letters rhyme, thus:


S was a Skeleton which wandered the grounds;
T was the Teapot emitting odd sounds.


In the second part of the book, there is a second alphabet describing how the Clark family has gotten rid of each haunting. Here each letter, in addition to the illustrated letter and the full page illustration, has a rhyming couplet:

S was the Saucer that smashed on the skull
Of the Skeleton errant to make it more dull.

T was the Twine that they twisted around
The tormented Teapot to strangle its sound.


At the end of the story, and despite their successes in getting rid of the hauntings, the Clark family moves away.

One can't help but compare such illustrated tales done with rhyming alphabets with the works of Edward Gorey.  Reggie Oliver has tried something slightly different, but the result lacks Gorey's uncanny ability to project a story in such a small number of words, and Oliver's style lacks the delightful wickedness of Gorey as well.  It's not that Reggie Oliver's attempt is in any way bad, it just doesn't stand up to Edward Gorey's clear masterdom.