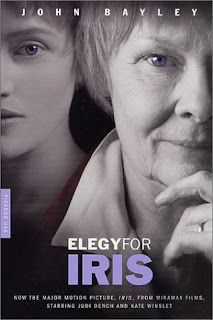 Irish Murdoch published twenty-six novels and a number of other books, including plays and books on philosophy.  She won (among other distinguished awards) the Booker Prize for her novel The Sea, the Sea (1978). She was careful of her public image, and the the integrity of her novels speak for themselves. She died in 1999 at the age of 79, but her final few years passed in the cloud of Alzheimer's disease.  Her husband, John Bayley, wrote and published the year before her death a memoir of her slide into dementia. It was filmed a few years later as Iris. It is a depressing and sad book, not so much for the picture it paints of Murdoch and her decline, but for the mere act of its existence, a complete betrayal of her integrity by her husband.  Now instead of being remembered for the high standards of her literary work, she is remembered as the demented old lady portrayed by Judi Dench in the film based on her husband's literary spousal abuse. Sadly, the book was a bestseller.

Posted by Bibliopolitan at 1:45 AM