Old Things and a Beautiful Thing 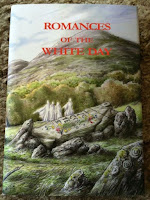 Romances of the White Day (2015) is the first of three small press volumes by the same three authors, each contributing a novella and a short essay about their contribution.  The authors are John Howard, Mark Valentine, and Ron Weighell.  The publisher is Sarob Press.  This volume is a tribute to the writings of Arthur Machen, and each story involves some Machenian aspect.  John Howard's concerns some London adventures by three men, decades apart.  The gem of the book is the story by Mark Valentine, which concerns the enactment of an ancient ritual in modern Wales.  Ron Weighell's concluding story reveals the secrets behind a lost decadent illustrator and a portal to another dimension.  Each story is well-done and engaging.

I watched the film Beautiful Thing (1996) a few decades ago, and if I knew then that it was based on a 1993 play by Jonathan Harvey, I had long forgotten it.  I thought the film rather good, but had had problems with understanding the dialogue at times because of the heavy (South East?) London accents.  So when I stumbled on the play, I thought,  Good, here's a chance to read it in the original form.  Well, perhaps that's not the best thing to have done. I probably should have instead seen a production of the play.  From what I recall, the play isn't much different from the film, but the film feels much less claustrophobic. Still, Beautiful Thing is worth experiencing in any form.*

*Well, after writing the above I learned that there was an edition of the screenplay itself that had been published (cover below) to coincide with the film, and I got a copy and read it.  That's just what I needed, in lieu of English subtitles lacking from the DVD.  Now I can understand the extra witticisms I was missing. 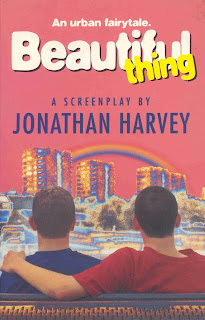 Posted by Bibliopolitan at 4:00 AM