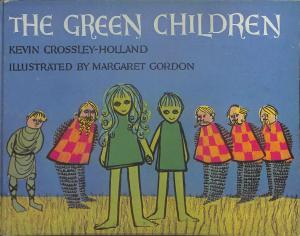 I happened upon an interesting reference to this book by Kevin Crossley-Holland, so I secured a copy.  Early in his career, Crossley-Holland published a number of reworkings of early Germanic literature, from Beowulf and King Horn to Havelok the Dane. Most of them are the size of short novels, whereas The Green Children (1966) is basically a short story, published as a picture book, illustrated by Margaret Gordon.

The origin of Crossley-Holland's version of The Green Children is found in two accounts of a twelfth century happening in Suffolk in East Anglia. One day two green children are found by peasants and brought to the local lord.  They can't speak English and are hungry but won't eat anything offered to them until they see some freshly cut beans. The beans satisfy their hunger, but over time the boy gradually withers away and dies.  The girl learns English and begins to eat normally, so that her green coloring diminishes.She notes that she and her brother came from an underground realm, and got lost in caves before emerging in the sunshine in a world new to them.

That's pretty much the whole tale in a nutshell.  I liked the story, but thought less of the illustrations.
Posted by Bibliopolitan at 6:10 PM