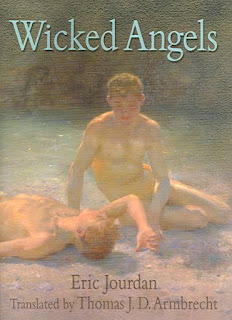 Wicked Angels is an English translation of the 1955 French novel Les mauvais anges by Eric Jourdan.  It was banned for thirty years in France, presumably because of its subject matter. It tells the love story of two seventeen year old boys.  Oddly, the novel avoids describing the sex between the boys and opts instead for a coy allusiveness and lyricism. This turns unpleasant as the boys take to inflicting pain upon each other as signs of their love. The escalation of this sadism leads on to the death of one boy and the suicide of the other. The short novel is divided into two parts, the first told by Pierre, and the second told by Gerard. Though it is marketed as a lost classic, it is not one. It is frankly boring, and the cliched ending (where same-sex lovers end up dead) is (fortunately) a thing of the past.

Posted by Bibliopolitan at 12:38 PM