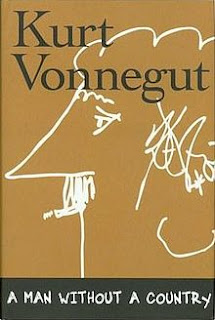 A Man without a Country (2005) was, I believe, the last book Kurt Vonnegut published during his lifetime. Vonnegut died in 2007 at the age of 84.  A Man without a Country is an old man's book, cranky, but humanist to the core, never flinching at the faults Vonnegut found in his fellow human beings.  There is a lot of wisdom tossed off in these brief introspective essays. Particularly dismaying at the present time is his description of psychopathic personalities, or PPs as he called them, "the medical term for smart, personable people who have no consciences." "PPs are presentable, they know full well the suffering their actions may cause others, but they do not care. They cannot care because they are nuts. . . .  So many of these heartless PPs hold big jobs in our federal government, as though they were leaders instead of sick. They have taken charge. They have taken charge of communications and the schools . . . What has allowed so many PPs to rise so high in corporations, and now in government, is that they are so decisive. They are going to do something every fuckin' day and they are not afraid. Unlike normal people, they are never filled with doubts, for the simple reason that they don't give a fuck what happens next. Simply can't. Do this! Do that! Mobilize the reserves! Privatize the public schools! Attack Iraq! Cut health care! Tap everybody's telephone! Cut taxes on the rich! Build a trillion-dollar missile shield! Fuck habeas corpus and the Sierra Club and In These Times, and kiss my ass! There is a tragic flaw in our precious Constitution, and I don't know what can be done to fix it. This is it: Only nut cases want to be president. This was true even in high school. Only clearly disturbed people ran for class president."

And so it goes today, as the worst PP of all is about to ascend to the presidency.  Vonnegut may be lucky not to have witnessed this happening, or those crimes against humanity we will see over the next four years.  But we who do witness them will miss the sane voice of Kurt Vonnegut calling everything out for the poison that it is.
Posted by Bibliopolitan at 8:55 AM

Email ThisBlogThis!Share to TwitterShare to FacebookShare to Pinterest
Labels: A Man without a Country, Kurt Vonnegut