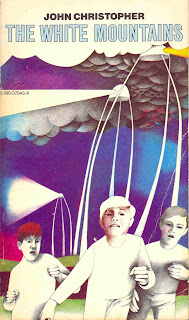 Somehow or other, I missed reading John Christopher's Tripods series when I was younger.  There are four volumes, the initial trilogy, The White Mountains (1967), The City of Gold and Lead (1968) and The Pool of Fire (1969), followed a decade later by a prequel, When the Tripods Came (1988). I've now read only the first book, The White Mountains, and though I enjoyed it, I'm not inclined to read any more. Basically, it's a tale of the post-apocalypse, where aliens have taken over and rule the populace by "capping" them as the children reach puberty---literally by placing metal caps on their heads, which diminish the curiosity of the person capped. The White Mountains is a tale of some boys who rebel, and run away to escape being capped. The scope is rather narrow, and the ending is abrupt and not very satisfying, clearly setting the reader up for the inevitable sequel.  My problem with the book is that the whole post-apocalypse scene has been done so many times already, and done better, since this book came out in 1967.  Perhaps back then it felt fresh and new, but from fifty years later it seems simplistic and contrived.

Posted by Bibliopolitan at 12:52 PM