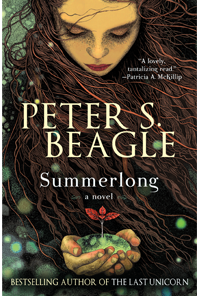 I can't recall how long ago it was when I first heard Peter S. Beagle had a new novel entitled Summerlong coming out.  It was certainly before 2005, and probably around 2003. Already scammed once by the crook Connor Cochran (for lots of details, see: http://fansagainstfraud.com/ ), I certainly did not order it whenever Conlan Press announced it (and never published it).  So now it's finally coming out in September from Tachyon Press as a trade paperback original.  I got an advance reader copy.

Anticipating something for thirteen years may raise one's expectations, but I tried not to let that affect me. And of course I won't use that incredibly stupid expression that it was "worth the wait", even if it were relevant. (How many people who wanted to read this book died in the decade-plus since it was first announced? Rarely is anything "worth the wait" for any reason.)

I'm afraid that Summerlong is not top shelf Beagle, but Beagle-lite. It's well written, and moderately engaging. I'm pleased at last to have read it, but it's pacing is so leisurely that the central idea might have worked better as a novella.  Basically, it's the story of an unmarried couple, Abe, a 65-ish retired history professor working on a book of medieval history, and his flight attendant partner, Joanna, who is about ten years younger than Abe. They have been together for more than two decades, though they live apart, Joanna in Seattle and Abe on a small island in the Puget Sound.  Joanna has a daughter Lily from a previous relationship, though Lily was raised by her and Abe.  Into this mellowing account of growing old comes a young beautiful waitress, who calls herself Lioness Lazos, who is mysterious and enchanting, inspiring unusual trust and adoration in whomever she encounters. Clearly there is something magical about her, and also about the strange people who come looking for her, after she has taken refuge in Abe's garage. These people seem to be acting out some part of the old myths.

The first half of the book is better than the second half, when the relationship between Abe and Joanna deteriorates after Abe is caught sleeping with Lioness on impulse, and as a result Joanna deliberately sleeps with the man looking for Lioness.  The resultant turmoil, as illogical as it is emotional, leaves a frustrating end which seems false to the characters as they had been so carefully developed previously. The result is disappointing but still mostly enjoyable.
Posted by Bibliopolitan at 12:03 AM