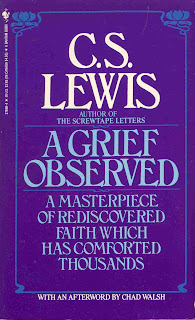 A few years after the death of C.S.Lewis, Owen Barfield, one of Lewis's long-time and closest friends, tried  to describe the change that went over his friend in the 1930s.  Barfield noted that Lewis had adopted some kind of posture, that Lewis had ceased to write in the mode of "I say this" but rather in the mode of "This is the sort of thing a man might say."  This observation has long perplexed me, as in my reading Lewis (predominately his fiction and literary essays, not the apologetics) I've never really noticed this before. But I have now, in the reading of A Grief Observed, which (supposedly) contains the notes from four of C.S. Lewis's notebooks written right after the death of his wife in 1960.  (The book was published under a pseudonym in 1961.)  Though there are passages of apparent actual grief in this book, there are also a lot of passages that feel like Lewis is posturing, that the exercise basically is Lewis setting up straw men arguments about the absences or cruelty of God in order to wriggle around them later. This makes the whole book (which fortunately is short) an essay in what Lewis calls "rhetorical chicanery."  I cannot imagine anyone finding anything of worth in these rantings unless one comes to them already as a Christian seeking confirmation of one's pre-existing superstitions.  This edition has an additional essay on Lewis by Chad Walsh, which is far superior (but with occasional lapses) to Lewis's own writing in this slim book.

Posted by Bibliopolitan at 11:49 PM