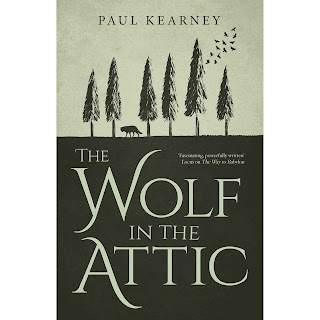 Publishers are idiots. In the blurb on the back cover of this book, The Wolf in the Attic (2016) by Paul Kearney, the prospective reader is told upfront a plot-point that doesn't happen until half-way through the book. And indeed, the book starts out so slowly that the reader is itching to get to that plot-point to see if it will go anywhere. It does, but in the end it isn't very rewarding.  Basically this is the story of a young Greek girl, Anna, who came to Oxford, England, with her father in the mid-1920s escaping the wars in Greece. It is now five or so years afterwards, late in 1929, and soon in the new year Anna will turn twelve. For the first half of the book, Anna tries to find a place as an English girl. It is very boring.  For the second half of the book, she becomes involved with some gypsies who represent one side of an ancient quarrel.  The Roadmen, chasing the gypsies, represent the other.  Anna now finds herself set-up to take sides in the old quarrel.  This, too, is not very interesting.  C.S. Lewis and J.R.R. Tolkien make cliched cameos in Anna's story, and the cynic in me would suggest that the only reason for their appearance in this book is to get blurb-makers to make comparisons between this novel and the two classic (and bestselling) fantasists. Otherwise they serve no purpose. Yet this isn't entirely a bad book. The set-up takes way too long, and the whole backstory is rather muddled. But basically, this is a young-adult novel, the first-person narrative of a twelve year old girl, masquerading (presumably another decision made by the idiot publisher) as an adult fantasy novel.  Thus misrepresented the reader expects something much different from what this book actually delivers. I will certainly have second thoughts before buying another book published by Solaris, for obvious reasons, and I won't be actively looking for further books written by Paul Kearney, for other reasons.

Email ThisBlogThis!Share to TwitterShare to FacebookShare to Pinterest
Labels: Paul Kearney, Solaris, The Wolf in the Attic