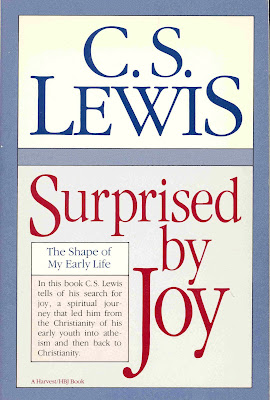 At least I knew going into the reading of C.S. Lewis's Surprised by Joy: The Shape of My Early Life (1956) that the earlier part of the book was going to be a lot more interesting than the later part.  Even the blurb on the cover gives away the fact that the book tells of Lewis's "spiritual journey that led him from the Christianity of his early youth into atheism and then back to Christianity." One wonders why a smart lad who had progressed to the putting away of childish things like religion, should revert back to the superstitions of his early youth.  It turns out the reasons are mostly all psychological  Lewis's mother had died when he was nine.  And after studying at Oxford, he took a tutorial post and was then elected a fellow in 1925. He found that his friends were turning into Christians (of various sorts) and all his fellow dons were Christian, and obviously a lot of the medieval materials he studied related to Christianity. So after his father died in 1929, both Lewis and his only sibling, a brother, gravitated pretty quickly back towards Christianity.  Lewis seems also to have been affected by the curious affair the had carried out with a married woman twenty-five years his senior, since around 1919, which he had tried to keep secret from his father, and which Lewis only hints at in his memoir ("I must warn the reader that one huge and complex episode will be omitted"). Lewis would never talk about this to any of his bewildered friends, or even explain it to his brother. So when Lewis describes himself  at the time of his conversion as "the most dejected and reluctant of all converts in England" one simply can't believe it.  Lewis rushed back to his youthful suckling on the teat of Christ to restore an old order to his life. This leaves a sense of tragedy.  Just think of what Lewis might have written if he stayed the course with his logical rejection of theism in all its aspects.  Instead of brilliant work we got stuck with loads of proselytizing crap. 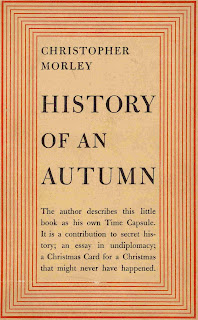 I picked up Christopher Morley's History of an Autumn (1938) because I liked the title.  The book itself doesn't amount to much. Basically, it's Morley's notes about the approach of the Second World War. There are some occasional insights, and a few hints at explanations of lost attitudes, but for the most part this is thin gruel. Not unpleasant, and fortunately in small supply.

Posted by Bibliopolitan at 10:30 PM

Email ThisBlogThis!Share to TwitterShare to FacebookShare to Pinterest
Labels: C.S. Lewis, Christopher Morley, History of an Autumn, Surprised by Joy