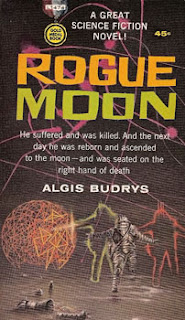 It's really hard to believe that this book, published in 1960, could ever have been considered a great work of science fiction, but it has an entry as one in David Pringle's Science Fiction: The 100 Best Novels (1985). The passage of time has not sat well on it. All the characters are manipulative and unpleasant people, shackled with the attitudes of the late 1950s. Worse, the characters are incompatible with the psychological drivel they spout at each other in long passages. Their expressed motivations actually do not fit their actions. And then there is the plot--most of which doesn't make any logical sense. Rogue Moon reads like a bad episode of The Twilight Zone, fleshed out a bit more into a cheezy novelization, but lacking in the zinger ending.

Posted by Bibliopolitan at 7:45 PM