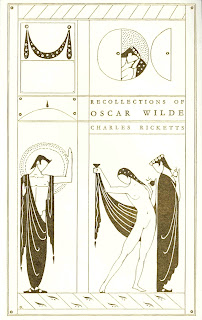 Charles Ricketts was a painter, illustrator and book designer who was a friend of Oscar Wilde from about 1889 until Wilde's death in 1900. Their friendship was much closer before Wilde's trial and imprisonment, though they corresponded until shortly before Wilde's death. These recollections were written thirty years later, and one year before Rickett's own passing, and they were published in an elegant limited edition by Nonesuch Press the year after Rickett's death. (The version I read was a slim paperback published in 2011 by Pallas Athene as a "close copy" of the rare original 1932 edition.) While these memories have a great deal of interest based on acute observation, they seem at times a bit inhibited and occasionally stiffly written. It's clear that it took Ricketts's a long time to feel able to write about his dead friend, but there remained a lot that he must have felt he couldn't write about at all. Yet here are some nice observations by someone who knew Wilde well before he became the famous playwright, and before the tragic downfall and exile. Ricketts found Wilde to be a man who embodied kindliness and who engaged in scintillating conversation:  "there were two personalities in him: the exhibitor of well-rehearsed impromptus, of which he had a stock, and the spontaneous and witty critic of Life. In the cadenced phrases of his prose, in the elaborate retorts of his actors, we miss the flash and glitter of his speech. Then, many of mechanical epigram, or inversion of some common saying, would be told with humour and conscious exaggeration, a smile, a wave of the hand, gave it its proper significance, the quality of his laughter preceding it (for he often laughed before speaking) gave the key to the temper in which an epigram should be understood." These recollections entice the reader; yet one wishes for more than these guarded observations that Ricketts eventually decided to share with posterity. .

Posted by Bibliopolitan at 9:00 AM