Le Guin: The Last Interview and Other Conversations 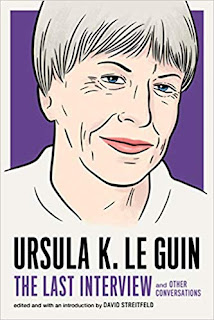 This is a collection of seven interviews with Ursula K. Le Guin, who passed away early last year at the age of 88.  These range in years from 1977 to "The Last Interview" itself, by the volume's editor, which took place occasionally from the summer of 2015 until Le Guin's death.  All of the interviews are interesting and revelatory, but the later interviews seem to me to be more free and revelatory on more subjects. So I would suggest that Le Guin may have been guarded in her early interviews, but opened up in the later ones.  In any case, the seven interviews make for a nice collection. I did not know before getting this book that it is one entry in a series of such books, all titled "The Last Interview and Other Conversations." Other volumes cover Ray Bradbury, Jorge Luis Borges, Philip K. Dick, and Christopher Hitchens, along with musicians such as Lou Reed and David Bowie, as well as public figures like Martin Luther King, Jr., and Hunter S. Thompson. All of the books have a uniform cover design, with frankly ugly art by Christopher King.

Posted by Bibliopolitan at 10:23 PM