The Addams Family: An Evilution 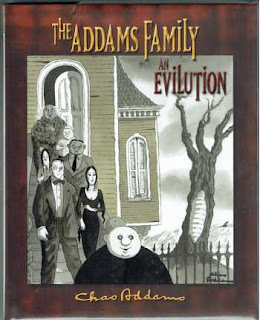 This coffee-table book, edited by H. Kevin Miserocchi, is basically a brief history of the evolution, from the late 1930s onward, of the characters of Charles Addams's cartoons that became known later as The Addams Family. The book is heavily illustrated with the cartoons from The New Yorker, as well as from other places. The characters are probably best known from the 1964-66 television series, or from the 1991 film (and its 1993 sequel). The characters have lived in popular culture for decades, and it's pleasant to revisit them while viewing the story of their development. And it's hard to describe the appeal of these characters--essentially they are outsiders, who view the world from a jaundiced and indeed morbid perspective, but who also have a warm-hearted side. Mostly.  Or to their fellow family members. Sometimes. Anyway, I enjoyed this retrospective as a kind of nostalgia.

Posted by Bibliopolitan at 12:00 PM

Email ThisBlogThis!Share to TwitterShare to FacebookShare to Pinterest
Labels: Charles Addams, The Addams Family: An Evilution