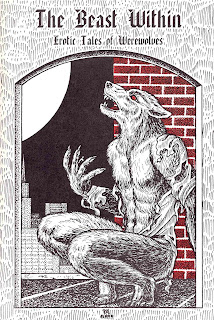 In the first story, “The Spirit That Denies” by Jay Michaelson, a male werewolf (in wolf form) has sex with a human female, after both feed on their kill of a deer. In the second story, “The Killing of the Calf” by Linda Hooper, a human female has sex with a female werewolf (in wolf form), just before their pack goes on a hunt. The third story, “Alma Mater” by Robert M. Schroek, a man lost in an Italian snowstorm is saved by a young woman, who changes into a wolf during their subsequent sex. There is an historical reveal in the final sentence that is pointless and dull. Finally, the last story, “Wilderland” by Reina Delacroix, at least tries to be something more than a mere sex scene. In it a young woman in Seattle spends time in a VR program called Wilderland in which she is a wolf, dreaming and masturbating, until she encounters a sympathetic associate in both the VR and real worlds.

Unless you have an interest in sex between humans and animals (in this case wolves), there is really no point to reading this collection. At its core, this booklet is just boring.
Posted by Bibliopolitan at 8:51 PM

Email ThisBlogThis!Share to TwitterShare to FacebookShare to Pinterest
Labels: Cecilia Tan, The Beast Within