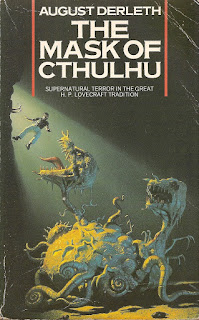 The Mask of Cthulhu (1958) by August Derleth contains six longish stories which are hard to categorize, beyond the obvious remark of their obvious indebtedness to the writings of H.P. Lovecraft.  The earliest story (in terms of composition), "The Return of Hastur," was seen in some form by Lovecraft himself before he died in 1937.  Derleth remarks in his brief introduction that Lovecraft saw the "opening pages and the outline of my proposed development" and made several suggestions that were adopted "enthusiastically" by Derleth.  Yet Derleth has taken Lovecraftian themes and nomenclatures, and extended and regularized them, so much so that the vein of Lovecraft is impure and even debased.  With the latter term I refer to Derleth's adding a sort-of Christian good-vs-evil orthodoxy to Lovecraft's invented pantheon of Elder Gods, all of which diminishes Derleth's stories and makes them so less satisfying than Lovecraft's originals. What Derleth has really done is to write a form of fan-fiction, ticking off certain ideas and invented lore that (Derleth thinks) will thrill the Lovecraft fans who recognize them.  Alas, that's a very low bar, and the resultant stories read like poor pastiches of Lovecraft's originals.

Posted by Bibliopolitan at 1:00 AM