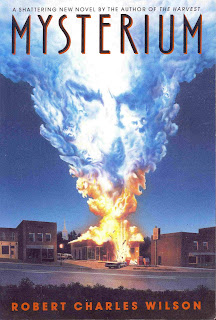 I’ve intended to read something by Robert Charles Wilson for a long time.  For no particular reason I selected Mysterium (1994), his seventh novel, which won the Philip K. Dick Award for Best Novel, 1994.  A blurb on the back for Wilson’s previous book notes that it “reads like a combination of Arthur C. Clarke and Stephen King.” This also applies to Mysterium, though I’d say this book reflects Stephen King more than Arthur C. Clarke.

It starts with an artifact being found at an archeological dig in Turkey, and its radioactive nature kills people. It is taken to a secret lab in northern Michigan, where some kind of accident causes the laboratory and the nearby town to disappear into an alternate dimension, which is slightly behind our dimension technology-wise, but it has developed theologically on very different lines. The characters in the novel all seem to be ciphers to which plot must happen, as in King’s novels, with a dash of Clarke-styled theological explorations.  It makes for a page-turner, but nothing more. Wilson writes well, but the plot of this book seems contrived and the whole superficial.
Posted by Bibliopolitan at 8:51 PM