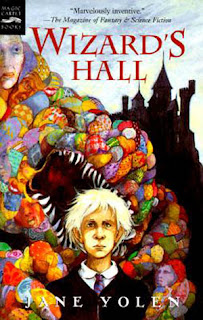 A young boy is sent to a wizard’s school where, with his select friends, he must save the school and its masters from an evil renegade who wants to take over everything.  In the years since the first publication of J.K. Rowling’s Harry Potter series, which began with Harry Potter and the Philosopher’s Stone (1997), this would seem to be the plot of one of the innumerable rip-offs, but it is not.  There were books about young wizards at school before Rowling, the best of which is Ursula K. Le Guin’s A Wizard of Earthsea (1968).  Jane Yolen’s Wizard’s Hall was one of these too, having been published in 1991, six years before the first Harry Potter book. Yet for all its similarities Yolen’s book stands in the shadows of Rowling’s better-known works.  Why is this so?  I think it’s quite simply because Rowling took her characters and their stories very seriously, whereas Yolen treats them whimsically and from a distance. Yolen has written a children’s story, with the problems that go with such a distinction. Rowling, on the other hand, wrote a more serious fantasy novel whose main characters are children.  A big difference, and perhaps the main reason why Rowling’s stories have reached such heights of popularity.
Posted by Bibliopolitan at 12:54 AM