The King of the Hummingbirds and Other Tales by John Gardner 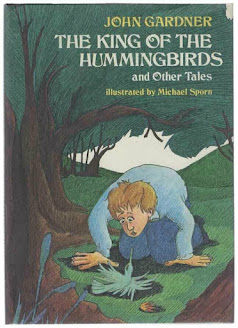 This is the third of Gardner's three volumes of fairy tales. It is also the least successful of the three--one feels that Gardner was tiring of the form. Though he lived another five years after the publication of this book, it contains his last four fairy tales. Like the second collection, it is illustrated by Michael Sporn. Again, the illustrations add nothing to the stories, which are a bit less focused than previous ones, and which move outside the circumference of usual fairy tale subjects, dealing at times both reverentially and later sarcastically with religion. Gardner seems to be going through the motions, occasionally cackling to himself and forgetting about the reader.

Posted by Bibliopolitan at 7:00 AM

Email ThisBlogThis!Share to TwitterShare to FacebookShare to Pinterest
Labels: John Gardner, The King of the Hummingbirds and Other Tales